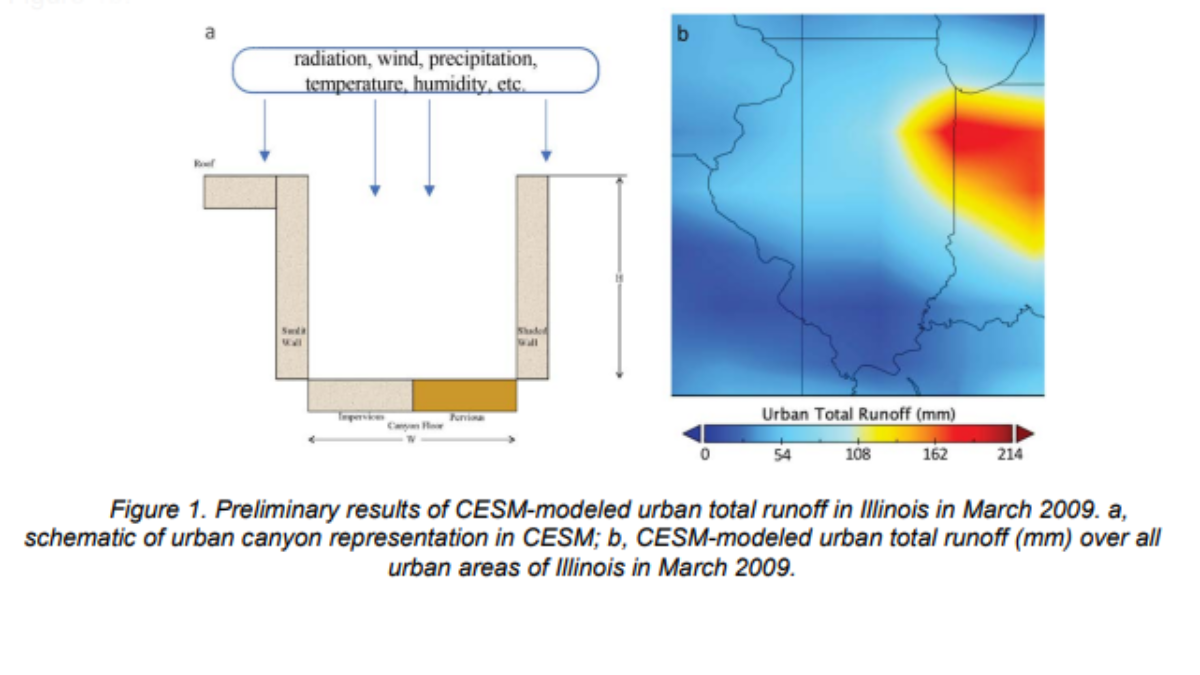 As urban infrastructure continues to age, the worldwide urban population continues to rise and climate change effects are being increasingly felt in urban environments. Coupled together, these factors have placed significant stress on the urban landscape. Green stormwater infrastructure (GSI) implementation has been identified as a possible tactic to combat these effects of urbanization and climate change and to help make cities more resilient and “livable.” Using the Community Earth System Model (CESM), we aim to quantify the hydrologic impact and urban heat mitigation co-benefits of GSI implementation in Illinois cities over a 30-year time period. We will simulate ground-based GSI technology, bridging microscale vegetation models and macroscale climate models to represent resilience effects of widespread green space in urban areas.

Urban flooding has become a prominent issue for many cities, arising from a combination of altered precipitation patterns, urban growth, development in floodplains, and increases in impervious surfaces. Climate models consistently project that frequency, severity, and duration of these extremes will increase markedly over this century under climate change. There is a pressing need to advance fundamental understanding of how climate adaptation strategies deliver hydroclimatic benefits
for cities under climate change coupled with urban development

Statement of Expected Results and Benefits:

Through this project, we aim to model the widespread implementation of GSI in cities
throughout Illinois using the Community Earth System Model (CESM) 18. We will focus on ground-based vegetated GSI features such as rain gardens and bioswales, which are designed to control, reduce, treat, and infiltrate runoff19. Our expected results include:

1) quantification of the effectiveness of GSI in reducing urban temperature and runoff over different cities in Illinois,

2) analysis of the impacts of GSI on urban surface energy and water budget.

3) understanding of impacts of GSI on urban hydroclimatology.

Based on these analyses and results, we will report our findings in peer-reviewed journals and educational videos, with policy and design recommendations for GSI and how it contributes to the city’s “livability”.

We propose to model green stormwater infrastructure (GSI) implementation in urban areas of Illinois and analyze the effects on urban hydroclimatology, flooding mitigation potential, and urban heat mitigation. The specific objectives include:

1. Model urban hydroclimatology and runoff for cities of different sizes in Illinois using the default parameters in CESM as a baseline (control for future comparison).

2. Determine the representation and parameterization of widespread GSI in CESM based on calibrated observations from microscale rain gardens.

Our research indicates that the Community Earth System Model’s (CESM) hydrologic modeling capabilities regarding runoff are spatially “robust”, or perform acceptably well under a range of possible conditions. When averaged annually, CESM’s projections correlated well with a groundtruthed observational dataset, University of New Hampshire-Global Runoff Data Centre (UNHGRDC), and a reanalysis dataset from NASA, Modern-Era Retrospective analysis for Research and Applications, Version 2 (MERRA-2), but there are still prominent areas where CESM struggles with both overprediction and underprediction. However, correlation coefficient analysis revealed that on a monthly basis, CESM is not as strong in accurately predicting runoff compared to UNHGRDC and MERRA-2. After this validation was completed, we moved to bridging the local-scale U.S. Environmental Protection Agency Stormwater Management Model (EPA-SWMM) to the global scale CESM to represent and parameterize widespread green stormwater infrastructure (GSI) implementation. We identified three relevant parameters and their corresponding calibrated values that could be used as inputs into the land component of CESM: saturated hydraulic conductivity, maximum ponded depth, and porosity. We have developed a parameterization implementing these values into the top 6 layers of the urban land model component of CESM, representing the depth of a rain garden, and are preparing simulations. Our ongoing work focuses on simulating GSI in CESM in 30 U.S. cities with combined sewer overflow issues; three of these cities are located in Illinois.