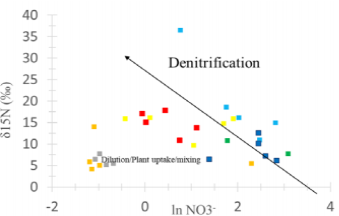 Agriculture is acknowledged as a leading cause of surface water pollution [1, 2], serving as the principal source of nitrogen (N), primarily nitrate (NO3), to aquatic environments [3-6]. Hypoxia, eutrophication, and biodiversity changes within surface waters, specifically the Gulf of Mexico, are attributed to excess NO3 loading [7-10]. On an annual basis in the US Midwest, an estimated 1 million metric tons of N is leached from the agricultural fields into waters of the Mississippi River [11]. Since 1950, the NO3 load discharged into the Gulf of Mexico has tripled [9, 12]. Illinois has been identified as the second leading contributor of
NO3, with Illinoisan agricultural activity contributing 19% of the NO3 load delivered to the Mississippi River [13-16].

1) Identify the flowpath of the waters traveling from the diversion tiles to the stream.

2) Measure the travel time for the waters along the flowpath to the stream, i.e. what is the residence time of the waters in the SBZ? Preliminary calculations using Darcy’s Law suggest a travel time from the eastern diversion tile to well 6 of approximately 51 days (Figure 3).

3) Calculate the amount of dilution using a mixing model.

A tracer test will be conducted to address the question and objectives. Sodium bromide (NaBr) will be introduced into the tile-diversion box. NaBr was chosen because the measured background concentrations of Br- have consistently been below 0.5 mg/L. Prior to the initiation of the test and once every two weeks over 22 weeks, waters from 20 wells (not 14 or 15), the diversion box, and the stream will be collected and analyzed.

Agricultural runoff diversion into SBZ may be a potential best management practice (BMP) to reduce NO3 in tile-drained waters. Outcomes from this project will further address the source of reduction, dilution or removal (denitrification or assimilation). The project will be considered successful if (1) travel times for the waters from the diversion tile to the wells are quantified, (2) a graduate student is trained in field and laboratory techniques, (3) a MS thesis has been completed, (4) presentations by students at an Illinois Water conference, an Illinois Groundwater Association meeting, and the annual Geological Society of America meeting, and a peer-reviewed publication have been completed. These results represent baseline data necessary to support all future research activities and develop appropriate BMPs for NO3-N applications.

Low cost mycelial stabilization of coal combustion products to reduce As, and Se contamination of groundwater 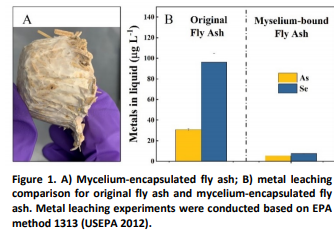 We hypothesize that fungal mycelium can be utilized to prevent groundwater
contamination by arsenic and selenium released from coal combustion products.

Task 1: Identify and quantify the key parameters that affect fungal mycelium growth in CCP matrix and their effects in reducing metal leaching potential from CCP.

This project will be conducted in the biogeochemical lab at Illinois Sustainable Technology Center. It will include significant participation of two undergraduate students from Natural Resources and Environmental Science Department: Madalyn Liberman and Sabine Miller. They will be trained in mycelium culture, column experiments, sample collection/analysis, and data reporting. By doing so, the students will obtain laboratory skills and experience in designing and conducting environmental studies. The results, if successful, will be adapted and modified for field level application through engagement of colleagues from PRI with expertise in ground water modeling and geotechnical engineering. It is expected that the results, if successful, will result in an IP disclosure to the Office of Technology Management, UIUC and also form the basis of a proposal to USDOE in 2020. 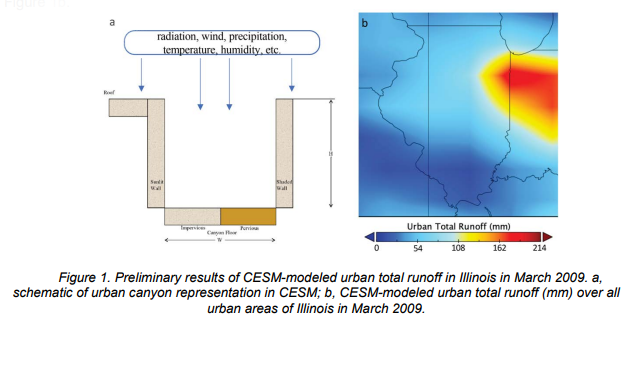 As urban infrastructure continues to age, the worldwide urban population continues to rise and climate change effects are being increasingly felt in urban environments. Coupled together, these factors have placed significant stress on the urban landscape. Green stormwater infrastructure (GSI) implementation has been identified as a possible tactic to combat these effects of urbanization and climate change and to help make cities more resilient and “livable.” Using the Community Earth System Model (CESM), we aim to quantify the hydrologic impact and urban heat mitigation co-benefits of GSI implementation in Illinois cities over a 30-year time period. We will simulate ground-based GSI technology, bridging microscale vegetation models and macroscale climate models to represent resilience effects of widespread green space in urban areas.

Urban flooding has become a prominent issue for many cities, arising from a combination of altered precipitation patterns, urban growth, development in floodplains, and increases in impervious surfaces. Climate models consistently project that frequency, severity, and duration of these extremes will increase markedly over this century under climate change. There is a pressing need to advance fundamental understanding of how climate adaptation strategies deliver hydroclimatic benefits
for cities under climate change coupled with urban development

Statement of Expected Results and Benefits:

Through this project, we aim to model the widespread implementation of GSI in cities
throughout Illinois using the Community Earth System Model (CESM) 18. We will focus on ground-based vegetated GSI features such as rain gardens and bioswales, which are designed to control, reduce, treat, and infiltrate runoff19. Our expected results include:

1) quantification of the effectiveness of GSI in reducing urban temperature and runoff over different cities in Illinois,

2) analysis of the impacts of GSI on urban surface energy and water budget.

3) understanding of impacts of GSI on urban hydroclimatology.

Based on these analyses and results, we will report our findings in peer-reviewed journals and educational videos, with policy and design recommendations for GSI and how it contributes to the city’s “livability”.

We propose to model green stormwater infrastructure (GSI) implementation in urban areas of Illinois and analyze the effects on urban hydroclimatology, flooding mitigation potential, and urban heat mitigation. The specific objectives include:

1. Model urban hydroclimatology and runoff for cities of different sizes in Illinois using the default parameters in CESM as a baseline (control for future comparison).

2. Determine the representation and parameterization of widespread GSI in CESM based on calibrated observations from microscale rain gardens.